The sun cast long shadows on the lush hillsides when they stopped for a cathedral lunch and watched the pretty girl with light green eyes worm a proposal out of her silver-haired date.

I totally swiped the cathedral lunch idea for this week’s Trifecta Challenge, including the third definition of worm. Please don’t tell!

I told her to lose the yoga pants.

Get hot again, I said.

I caught her draping her tits on that biker dudeâ€™s arm and I lost it.

That wasnâ€™t what I meant.

Thirty-three words ending with “That wasn’t what I meant.” The possibilities are truly endless. Why don’t you take a shot?

He lay in a cheap hotel bed as she lay in the street, dying.

After they laid him in the morgue and her to rest, they found the truth lying in a drawer.

Thirty-three words on love gone wrong, minus love, sad, tears, wept, heart, and pain for this week’s Trifextra. Oh, and this is a true story.

He always felt guilty about it afterward.

â€œHere, Chloe, letâ€™s get you into the cart,â€ he said calmly as he lifted her up. Nothing strange about that, he thought as he began his shopping. One by one, he put orange juice, cereal, granola bars into his cart, stocking up. His heart pounded.

He meandered to the other side of the store, eyeing the cheap sandals and colorful towels.

â€œChloe, sit down please,â€ he said distractedly. â€œChloe, want to pick out a doll?â€ he said brightly. He quickened his pace, nearly rushing toward the toy section. Finally, he thought. Calm down, he thought.

He slowed down as he neared the doll aisle. He lurked, wishing that he didnâ€™t feel like such a creep for being here. He peered down the aisle, thrilled to find it empty.

â€œOkay, Chloe, Daddyâ€™s going to buy you a doll. Any doll you want, okay?â€ he smiled at his four-year-old daughter. He moved slowly down the aisle, as if in a trance, and straightened each doll. He neatened their clothes and caressed their hair. He used one finger to manipulate their moveable eyelids, opening each lovely eye so that every doll was looking at him.

â€œDaddy, I want to get out!â€ Chloe screamed from the cart.

â€œNo, no, Chloe, you have to stay in the cart,â€ he barked, too loud. He was so close. He snatched up a box of granola bars from the cart and tore it open. â€œHere, have a snack.â€ He thrust the wrapped granola bar into her hands.

â€œYes, dear,â€ he mumbled. He looked desperately up and down the aisle. No one yet, he thought, relieved. He ripped open the granola bar and handed it to Chloe. He scanned the dolls, all neat, tidy, and looking at him with their loving eyes. He pulled out his phone and snapped a photo, trying to keep his hands from shaking. He smiled at the photo.

â€œWhich one do you want, Chloe?â€

My submission, including the third definition of manipulate: to change by artful or unfair means in order to serve one’s purpose: to doctor, for this week’s Trifecta challenge. 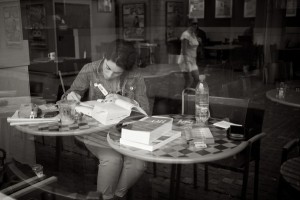 He watched her work at the next table, his coffee growing cold. After an hour, he scrawled the note on his napkin. After two, he tucked it inside her book. She didnâ€™t notice.

The first time I saw you I knew we would be friends. You stood on the street in those old jeans and a gray shirt with a smirk and a glint in your eye. â€œCome here,â€ you said.

33 one-syllable words for this week’s Trifextra.

Nate woke me. â€œGuh mornin, Momma.â€ He stood by the bedside, smiling, reaching for me.

â€œGood morning, sweetie,â€ I answered. I closed my eyes again for just a minute, bracing myself. Then I climbed out of bed and slid my feet into my slippers. The window framed one of those heavy gray skies that show up in December and stick around until March, sometimes April.

I bounced down the stairs so the kids would know Iâ€™m happy to see them. Anna sat at the table gently tilting her new labyrinth game. â€œMommy, I made it to 35!â€ she called.

â€œCool!â€ I answered, hugging her.

I headed for the kitchen, searching for breakfast, coffee, more children. Both boys were heading down the back staircase, and Gabe grabbed Nate at the bottom for a hug and a kiss. That doesnâ€™t happen every day. Next, Gabe came over and hugged me.

â€œGood morning, sweet boy,â€ I said and rubbed his super short hair. Nate wrapped his arms around me from the back.

From over by the coffee pot, Geoff turned and laughed. â€œNate, did you just kiss Mommyâ€™s tush?â€

Thatâ€™s when I knew it would be a good day. 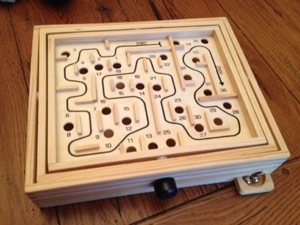 â€œSheâ€™s here,â€ Mikelo announced, sounding surprised. He made a three-quarter turn and swirled his cloak around himself. â€œI can feel her.â€ He held up his hand as if to demonstrate it. How often had he conjured up characters? Why shouldnâ€™t one of them finally become real?

No one seemed to notice his excitement. They shuffled nearer and nearer to the priestesses, anxious to offer their responses to today’s question. They each could only imagine their own beginnings and endings. The poor limited beings, Mikelo thought. Nevertheless, he could feel her here, his girl-now-woman, new to this world, fresh from death. His story had given her new life, he knew it. Now he would find her, he alone could be her companion.

â€œLook for her,â€ he called, striding through the gradually shrinking mass of creatures. â€œA young woman alone and searching. Sheâ€™s new here.â€ He got nods and murmurs in response but no shouts of recognition. â€œI need to help her,â€ he said.

Mikelo was much older than he looked; he was nearly 300 years old the last time he had consulted. Time had trained him to be patient. Yet here he found himself, his heart suddenly racing as he hunted for little more than a phantasm, dead certain that he and she had work to do together.

My contribution to Trifecta this week, including the third definition of the word companion: one that is closely connected to something similar. Like this? Read the rest of the story!

â€œWill you send me a picture?â€ she asked. â€œText it to me, while Iâ€™m at work, concentrating,â€ she raised her eyebrows and smirked cutely.

â€œYou get to think about me every time your cock brushes your zipper,â€ she laughed. â€œWhat else do you want?â€

â€œOf course,â€ she stopped smiling, gave me a straight face.

What the hell, Iâ€™ll play her game. â€œYour panties.â€

Forgive me for getting a little dirty for this week’s TrifeXXXtra submission. Did you know that November 15th is National Erotica Day? Go check out the rest of the submissions, I won’t tell.