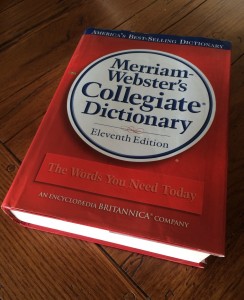 I didnâ€™t always know how to use a dictionary.

Youâ€™d think Iâ€™d have learned earlier than I did. I always liked dictionaries. My momâ€™s tattered old American Heritage dictionary led me to a long flirtation with the brilliantly displayed Oxford American at the library. I can still picture that Oxford glowing under a spotlight on a wood pedestal almost too perfect to touch.

I had a few amazing English teachers in high school â€“ one who loosed Randall Jarrell, Oddyseus, and Shakespeare on me in the same year; another who taught me how to frame an argument; and my favorite, who insisted on last names and demanded nothing less than my best work â€“ but none of them made much of a deal about the dictionary. I left high school wanting to know more about words as much as I needed to.

At college, I studied English with a minor in writing. I felt passionate about words but I still didnâ€™t own a dictionary. This was in the mid-90â€™s, before the Internet was a big thing and when books still came on paper. Like any 20-year old, I thought I knew myself.

Junior year I took a poetry-writing class that changed everything. My very favorite professor taught the class. She was older, maybe pushing 70 at the time, and a nun â€“ if you recall, this was a Catholic womenâ€™s college. But my favorite professor was snappier than the usual nun, and she was smart, in the cool sense. For many years she taught English at a prison. She was bold yet down to earth.

When I began the poetry class, in late August, I was an expert on me. I had breezed through three years of college with almost straight Aâ€™s. Grades still mattered, a lot. The week before Thanksgiving, I missed a syllable in a metered piece that I read aloud in class. It was a careless mistake and a peek in my nonexistent dictionary would have prevented it. After class, my favorite professor told me Iâ€™d never be a poet. By the time I finished the class in mid-December, my voice abandoned me and I began to hate myself.

That mistake wreaked so much havoc on my life that I just have to laugh. I whole-heartedly blame the missing syllable for my first round of grad school rejections, since I foolishly asked my favorite professor to write a letter of recommendation. I sometimes hold onto relationships until long after they are dead. I hold the missing syllable accountable for my selective mutism when I finally did eke my way into a graduate program.

Still, it took another five years for me to land a job as an editor. It took five years of feeling like a fuck up until I stumbled into my new bossâ€™s office and saw the dictionary sitting on her desk like the Bible. My boss led by example and was never the type to hold my hand. Instead she handed me a shiny new copy of Websterâ€™s 11th and told me to go find myself in it. It wasnâ€™t easy but I wanted to impress her, so I did it.