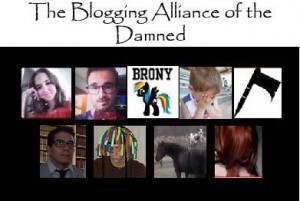 Welcome to the fourth installment of The Alliance of the Damned, in which a bunch of death-defying bloggers tried to come up with something that I didnâ€™t know about myself. This was a tough one, since I know myself pretty well, but even so, I still managed to surprise myself. Results ranged from uncannily true to eerily bizarre â€“ I even managed to snag my favorite stalkerâ€™s phone number!

Check out these great bits of microfiction:

Our Axe-Wielding Editor was once a lumberjack.

Shortly after college, Christi disguised herself as a man and signed on for the season with a Pacific Northwest logging company. She imagined publishing an award-winning expose.

Christi held her own, so the mocking of her small size receded. Still, she had to bite her tongue when the sexist remarks flew.

She had planned a big reveal before bidding the job farewell. But instead of tearing open her flannel shirt to reveal her true identity, she slunk off with the satisfaction that her presence had caused a homophobic coworker to question his sexuality.

After putting the kids to bed, she sneaks out into the night. Dressed in all black, she blends in with the shadows. Her family knows her as wife and mother, but they remain clueless as to her nightly endeavors.

She cuts down villains who refuse to learn the difference between theyâ€™re, their, and there. She slays the demons who think the word is pronounced â€˜suposablyâ€™ or who believe â€˜irregardlessâ€™ is actually a word. Wielding her mighty battle axe, she destroys all the things that make us writers cringe in disgust.

Who is Christi? She is a part-time, word-nerd ninjaâ€¦

Christi is a world renowned finger puppet artist. From a young age she knew that her true calling in life was to create friends for her fingers. After gathering the courage to share her earliest puppets with her family, after they ceased laughing and realized she was serious, they showed her the proper encouragement to send her down the path of destiny to fame, but not fortune. Sadly, there is no money in being a finger puppet artist, so she has resorted to blogging until the world is ready to compensate her at a level that matches her true worth.

I sense a ticking, unrelated to the passing of time. Experiences and thought mark your own personal calendar, wherein the Day of Gifted Lizards and the Day of Waterslides mean more than whether or not it was January or springtime.

You are a creature of fate, not bound by it, but by sitting pretty in the middle of its tornado.

It is quiet, but not necessarily calm, and you give the tangles of fate your full attention. You are one of the few who can see them, so you watch carefully, and mark your moments as you happen upon them.

Christi is immortal. She has lived for hundreds of years, and will live for hundreds moreâ€¦unless another immortal being chops off her head. If that happens, the beheading immortal will gain all of Christiâ€™s powers in a process known as the Quickening.

She has kept her immortality a secret through the years, adopting false identities every so often. She does not want to be discovered by the other immortals who, upon learning of her existence, would likely pursue her to the ends of the Earth.

Unfortunately for her, the secret is now out…

Born a Caucasian male, though you may have changed; in youth was a bed wetter and demonstrated signs of genius.Â  Your potential was overwhelmed by your obsession with taxidermy; where you killed the animals yourself.Â  Due to your troubled family background, you now have fixated on obtaining a nuclear family.Â  After multiple failed relationships you have begun hand picking your targets and kidnapping them utilizing Craigslist.Â  The taxidermy skills aid in the evisceration and stuffing of your victims.Â  You live alone, on the outskirts of a big city so that you can obtain victims easily, but go unnoticed.

The minute he got into the elevator and faced the back, I knew.
A lifetime in jail had eroded his humanity.Â Confinement disfiguresÂ you; years later, all you are isÂ hatred forÂ small spaces and gray sweat pants and red jello.

We were a group of stupid kidsÂ playing an elaborate prank.Â Until that girl accidentally died.Â Nights like these she’s alive, over and over.Â Confined to aÂ 10 by 10 foot holding cellÂ in my brain.Â Along withÂ loneliness, boredom, a deck of cards for good behavior.

And losing my virginity to a corrections officer on a cold slab of cement.

EditMoi doesn’t know that she has a stalker. Yes, a stalker.

His name is Fran. Fran has no hair on his head, but he has a thick, blonde mustache. It’s really creepy.

Despite his stalker stache, he’s really a nice guy.

Actually, I don’t know that. I’ve never even met or spoke to him. So there’s that…

Fran doesn’t physically stalk EditMoi. No, he cyber-stalks her. He reads all her work, salivating over every new post, mesmerized by every word. To say he’s in love would be an understatement. He’s obsessed.

Fran, who’s a a friend of a friend of mine, told his friend to tell me to tell EditMoi that he just can’t go on without her. He’d like her to call him at her ealiest convenience so they can discuss their inevitable future together.

Thanks, Alliance of the Damned, for having me among your ranks and for teaching me that I am a lumberjacking, bed-wetting, finger puppeteer, ex-con slash word ninja, who’s a victim of fate and a mustached stalker. I hope you guys don’t mind protecting me from myself. It’s going to be a long haul since I’m immortal. Wait, none of you are immortal too, are you?

One more thing — I swear I did not steal my kids off Craigslist. I got them the old-fashioned way.

Anyone else want to take a stab at decoding me in 100 words? Tell me something I don’t already know.

32 thoughts on “The Damned Truth (about me)”