Every night Daniel had the same futile dream. Heâ€™d wander bare, scorched earth to the base of the steep, sheer cliff face and begin to climb. Heâ€™d climb till his limbs ached and his fingertips bled, begging footholds and handgrips, gradually filling with anticipation at the promise of the top, only to reach it and find the dull flat expanse of empty miles ahead of him once more. In the faraway distance, the stacked cliff loomed again. Nearly hopeless, heâ€™d lift himself and start over, his steps heavy.

Daniel always woke before he reached the mountain a second time.

She hid her children deep within the bales of hay on the truckbed and watched the laborers as they drove off, up the rutted roads. Inside the walls of the community, the workers lifted heavy bale after heavy bale, all the while wondering at the tiny squeaks eking out now and then.

When one tall, dark laborer at last reached the childrenâ€™s cubby, the squeaks had long since quieted. He wailed when he saw their thin faces, and unwound their small bodies from their brightly colored blankets.

Sadâ€”trueâ€”but at least they had found a better life, he thought as he lifted his shovel.

Ann liked to lurk on the bench behind the bell and watch the JV team run sprints while she officially graded midterms. Surreptitious, she knew. But if she had to focus her mental energy on their ridiculous, self-involved schlock, she felt that she deserved the reward of watching their young, lithe bodies disturb time and space. Ann eyed the walkway as she flipped open another abysmal essay. Good. No one yet, she thought. Then she glanced down at the blue book in her hands.

He sipped his sangria and contemplated the hideous painting in front of him as he plotted.

The sun turned the ice cubes to water and cut the sweetness of his drink as it warmed his back and prickled his scalp.

He jotted in his notebook now and then, planning. When he completed his list he put away his pad and enjoyed the rest of his drink.

At last, he saw her coming and signaled the waitress for more drinks.

â€œHi, there,â€ she laughed as she dropped her bags and joined him at the bar.

He smirked. She had no idea.

Grandpa told them that pirates buried their loot by the water.

The boys spread out the old map on the front porch, beneath Grandmaâ€™s lamps. They traced its streets with their fingers, following its maze under train tracks, around erstwhile buildings, through the skeletal neighborhoods to the looming lake.

They used a twig to poke a hole in the spot.

They stuffed the map into a ratty old bag, along with a toy shovel, some of Grandmaâ€™s cookies, and a disintegrating can of Sprite.

None of the streets matched the map. No one thought to look for the boys until much, much later.

100 words for this week’s Friday Fictioneers. Go check out the rest, or better yet, write your own.

The nasturtiums outlived mom by several weeks. After the arrangements were made and the hubbub of the funeral had passed, I returned to pack her things. I found her there waiting in the empty rooms. The moving boxes made her angry and I knew I had to work quickly to dismantle her reality. She cringed while I wrapped her art pieces in newspaper and boxed them for my sister. In the kitchen I rinsed her long-empty water glass before I packed it, catching a glimpse of those flaming petals in the window box.

They worked through the afternoon, time seeping in a slow drip and the heavy air wrapping itself around the benches, spliced through with the electric jolts of the power tools. The sun slanted low in the sky as they cleaned up their tools and wiped down their benches. It would be a lovely sight, she thought, if things were different.

Before she headed for the dingy white bus, she slipped the sharpened sliver inside her sleeve. Aboard, she sat down near the front, staring at the sun through the window. The older woman’s hand on her wrist jolted her. 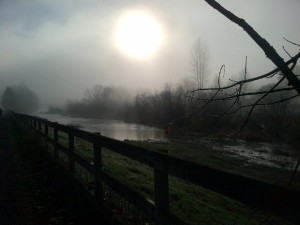 She best liked the days that matched her mood. These foggy, chilled mornings drew her out of her meager cabin and along the stream, into herself. When the sun hung like this, low and blurry, she could stare without squinting until she felt it open, much as she imagined a secret trapdoor releasing in her mind that would burst open with all of her unchosen possibilities. When the cool damp air soaked through to her pale skin, she would wind her rainbow-colored scarf a little tighter around her neck and wander on the icy bank, looking for the danger ahead.

My 100-word contribution to this week’s Friday Fictioneers linkup. What do you have to say about this picture?

The house washed up years later, on a lonely beach with a new foundation of rocky barnacles. It showed no signs of its youthful beauty and teenagers were quick to invade it. They further sullied it with their used condoms, empty beer bottles, and ghost stories.

At the height of its second life, none of the houseâ€™s inhabitantsâ€”or rather, visitors, for no one ever stayed very longâ€”ever paused to imagine the dwelling complete, roofed, and sturdy. The reincarnated house preferred it that way, liking its temporariness to the stiff perfection of city life. Yes, the house felt more alive than ever. 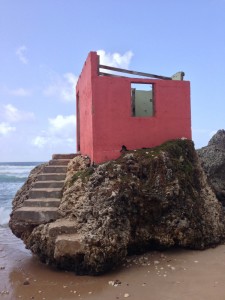 My 100-word contribution to Friday Fictioneers, a cool writing blog that I just discovered.