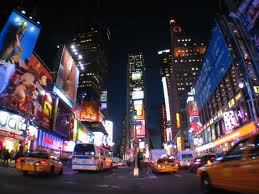 Around New Year’s, I suddenly had an urge to visit New York City. Significantly, before my foray into sex blog land. I had been feeling depleted, and I needed an energy infusion. We debated going somewhere a little more child-friendly, but in the end, Geoff knew that I wanted it, and he let me have it.

We spent two days, walking everywhere, seeing and feeling the city. We ate empanadas, pizza, waffles, corned beef sandwiches. We did the Empire State Building, the Statue of Liberty, FAO Schwartz, Central Park. We definitely had to gear our trip towards the kids, and that’s too bad. But still, I got the energy that I craved. It was cold, it was gritty, and it was hot. Energy is just up for grabs in New York. I’d like to spend more time there in the future, exploring on my own or with Geoff.

Now, could I experience New York from afar? Might I read the New York Times online here in my home, far, far from New York City? Could I watch movies that were filmed there? Should I read novels that are set there? Perhaps. Maybe those things will tide me over, letting me get the energy vicariously for a bit. But really, what I need, what sustains me, is feeling a place in reality. Being somewhere opens my receptors in a way that mere representation cannot. I need to submerge myself in a place to really sense it. Also, the quality of the energy available is exponentially higher in reality. Don’t get me wrong. I love art. Movies are awesome. I think it’s obvious how I feel about reading. Yet nothing comes close to the real thing.