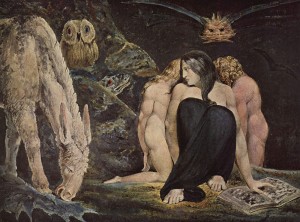 The smell of smoke lingered in the air. The cook fires were all lit, burning at intervals along the edges of the mass of creatures. Morsels of meat were up for grabs, roasting over suspended grates. That food would make some lucky oneâ€™s last meal. Spiced drinks warming in mugs added sweetness to the smoke.

The sky was just beginning to tinge with late afternoon pinks and blues, and Zannaâ€™s heart sank. She had misjudged her new world. First impressions were tricky, she knew. She could still feel the calm anticipation within the queues, but it did not belong to her. She was still an outsider here, and she needed connections, alliances, to proceed.

Zanna jogged past a long-necked beast clothed only in creamy white fur. Llama, she thought. The name came to her from a past life. An owl perched on its shoulder. No, she thought. These creatures are not as they seem. However fantastic these beings would be elsewhere, here they are commonplace.

Suddenly her feet caught up on something and the ground came up to meet her. She hit hard and splayed out on the ground. Minutes passed and she felt something cool on her foot. A glance revealed the llama-like beast, pressing his snout to her skin. â€œAre you okay?â€ he seemed to ask as Zanna pushed herself up to sitting, but his eyes were wary.

She smiled to show that she was okay, although her ankle did hurt. Just then she noticed a book next to her, large, rippled, leather bound. It was well used. The book had tripped her up while she ran. Zanna tried to reach for it, gently tugging at the shawl that had become tangled around her. To her surprise, the scratchy wool had turned soft. In fact, the shawl was no longer a garment at all â€“ somehow in her fall, the wool had changed to glossy feathers. She had been given a pair of wings.

Zanna sat on the chilled ground in the gathering dark, her strange companions clearly concerned about her. She could feel the steely resolve of her past, her human life, propping her up. Yet here she was weak, injured, and changed. She could smell the smoke in the air and she was hungry.

My submission to this week’s Speakeasy, based on William Blake’s painting The Night of Enitharmon’s Joy. Like it? Read the rest here.

6 thoughts on “Her fall”