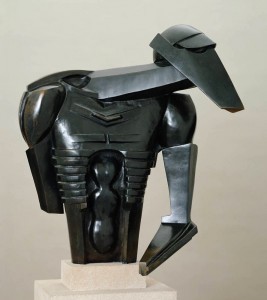 Ghazi Aslam had a face like a pterodactyl, or so the guys at school told him. He compensated for his bad looks by taking good care of his teeth, covering as much of his face as he could with a beard, and working out until his chest took on the rough density and dimensions of a Gothic breastplate.

Ghazi looked in the mirror only once a week while he trimmed his beard, and he was okay with what he saw. He tried to be nice, plus he had a voice like an angel. His friend Keisha talked him into singing with her choir, and she assured him that the other members would be cool with a hawk-nose Muzzie â€˜slong as he brought his perfect tenor. He never let them down.

Aside from choir, Ghazi preferred it behind the scenes. He worked as a prep cook at a fusion joint downtown, 3 to 5:30 every day but Monday. That left him free for classes in the mornings and choir rehearsal Thursday evenings, and that worked for him. Ghazi was meticulous when it came to his job. He had his tasks broken down to a science, and arranged his time into five-minute-long segments. Spices were combined, onions chopped, lemons squeezed, shrimp peeled all by 3:20. About to set to work julienning carrots, Ghazi felt his phone buzz and the familiar opening chords of Danzigâ€™s Mother escaped from his front-left pocket. He chuckled and set down his knife.

Ghazi and his mom were close and he took her calls no matter the time. He slid his hand underneath his apron and reached into his left-front pocket. â€œHi, mom,â€ he said as he cradled the phone on his shoulder so he could continue to slice the carrots. He lifted the knife with his right hand and went to work on a carrot while he chatted with his mom. He was more attentive to the chopping than he was to the conversation. Later, the details of what his mom said would escape him.

At 3:27, Ghazi slid the julienned carrots into a bowl, cut off his mom, and said goodbye. Later, he clearly recalled that he had been bothered by the slip in his schedule. He stashed the phone back in his pocket and went to retrieve some herbs from the fridge. When he returned with the rosemary and thyme he was annoyed to find his best knife missing from its usual spot, parallel to the right-hand edge of his cutting board.

Ghazi spent two minutes searching unsuccessfully before he gave up and resorted to his paring knife to chop the herbs. He had time to make up. He moved to the stove and set about caramelizing onions and melting butter for a roux. He sang gospel songs while he worked, warming up his voice for rehearsal. Luckily, Ghazi was alone in the restaurant, so no one was there to jive him about his rendition of Amazing Grace. By the time Lisa rolled in at five to set up the dining room, Ghazi was back on schedule and had the stovetop laid out with bubbling saucepans.

He scoured for the lost knife one last time at ten after five, while he was cleaning his work station. It bothered him but there wasnâ€™t anything more he could do. He went over the menu with Yang, the chef, and hung up his apron. By 5:35, Ghazi was hopping onto the crowded rush hour train uptown to rehearsal. He chalked up the stares to his humongous schnozz and tried to smile whenever he met someoneâ€™s eyes.

At 5:55 he met Keisha with a hug outside the church. They went inside for rehearsal. Seconds later, old Mrs. Foster let out a shriek to wake the dead, and Sam Smith, ex-college linebacker and one of the choirâ€™s two baritones, tackled Ghazi to the worn red carpet of the chapel, yanking the butcherâ€™s knife from the back waistband of his jeans. Buff as he was, Ghazi didnâ€™t stand a chance against Sam, nor was he expecting to be attacked in church.

The cops tried to frame him as a misfit mommaâ€™s boy with a prophesy to fulfill and made him out to be an obsessive-compulsive.Whatever, Ghazi figured. He was just relieved to have located his misplaced knife.