Let me tell you a story about when I was a kid. Iâ€™ve mentioned it before, but Iâ€™ve known Geoff since I was little. We were, much like we are now, best buddies. At some point our moms broke off their friendship and I thought that I had lost Geoff forever. Years went by until we reconnected in college, and when we did we gave all the credit to fate even though friends really brought us back together.

This year Iâ€™ve been able to reconnect, separately, with two people whom I love. Two people whom I had written off as lost, people whom Iâ€™ve loved but not loved quite enough, people who loved me but whom I thought didnâ€™t love me quite the way I wanted to be loved. Both relationships were imperfect and difficult, and they scared me.

This year I decided to take a chance, to be honest, to open up to these friends. I realized that I missed them and that I couldnâ€™t continue until they knew that. I went to these friends and let them know how much they mean to me. And do you know what happened? Those friends have come back to me.

I still believe in fate. I think the universe will find a way to lay the things we need out of life in our paths at just the time we need to find them. But Iâ€™m revising myself. I also think that we have the power to ask for what we want and we have the ability to get what we need for ourselves. The hardest part is admitting our fear.

Itâ€™s important to remember that itâ€™s always possible to go back and fix our mistakes in life. Sometimes all it takes is a simple apology, a hug, or an â€œI love you.â€ Sometimes itâ€™s as easy as accepting our own imperfection. Sometimes itâ€™s a matter of letting go of what we think we have and trusting in fate to bring it back if we truly need it.

Iâ€™m serious. Many things are out of our control, but youâ€™d be surprised by how much power we have. To my two old friends who are new again, thank you for teaching me this. Now go ahead, give it a try. I dare you to go back and fix something in your own lives. 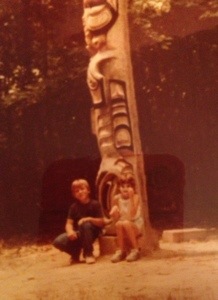 It dawns on me that I haven’t told you the story yet, at least not completely. I’m warning you, this is a good one. It’s a story like a train without brakes, taking everything in its path.

It started back in 1981 or so. I was four years old, so was Geoff. Our moms each shared a close friend, Maureen, a Carmelite nun. She’s my namesake. Each of our moms came to her during their pregnancies, each one a story of its own.

In 1981, Maureen left her monastery for a time and traveled far away. Knowing that she would be gone for a year, she introduced our moms. Geoff and I were four. He and his mom came over. While our moms got to know each other, we played outside. As the story goes, I pulled his hair. His mom got angry, defensive. Somehow or other, our moms patched things up and forged a friendship in Maureen’s absence. They spent lots of time together, and so did Geoff and I.

We were buddies. We went to camp together, I took trips with him and his parents. He cut up my food in restaurants. We had sleepovers where we shared each other’s beds.

When we were six, I told him that I loved him. He kissed me on the forehead and told me that he wanted to marry me when we grew up. We kept it a secret.

Two years later, our moms had a fight and split up. It felt like the fun parts of my life suddenly vanished. For the first time, I hated my mom’s control over me.

Ten years passed. Freshman year of college, I heard from Maureen that Geoff and I were in the same city. Weeks later, I got a call from a friend who had run into Geoff.

Listen. I was dating a guy. I loved that guy. I even thought he was the one. But I was wrong. From the moment that I knew Geoff was in my town, that other relationship was on the tracks. Six months passed and Geoff and I were dating. The train snatched us up and we’ve been aboard ever since. Next week we’ll celebrate our 13th wedding anniversary.

Now, what do you think? Does hearing the story make you believe in fate? If this were your story, wouldn’t you do anything to protect it, to preserve it?