A reprise of Shawn and Jenny for this week’s Speakeasy. I’m warning you, this one might be a little disturbing. I hope you’re into being disturbed.

Life had once been defined by linears and absolutes. Shawn hadnâ€™t always felt comfortable with a whip in his hand. Rulers and T-squares were long his tools of choice and he still longed for the familiar weight of a freshly sharpened pencil in his hand even as he stood before his naked wife, his hand filled with the whipâ€™s heavy leather handle.

â€œJenny, dear,â€ Shawn raised the whip above his head, â€œIâ€™m thinking of making a soup for supper.â€ He brought the whip down with a satisfying crack.

Of course Jenny couldnâ€™t answer with the gag in her mouth, but Shawn chatted pleasantly nevertheless, as usual. Jennyâ€™s body tightened with the impact.

â€œI could make that butternut squash recipe you like so much,â€ Shawn continued. â€œAnd I think Iâ€™ll pop over to the bakery for some bread later,â€ he raised the whip again, feeling excited over his prospects for the rest of the day. His designs for the new building were nearly complete, and Jenny seemed nearly ready for him to have his way with her. And there was the soup, too. A perfect day, he thought.

Whip in midflight for the third time, Shawn had a flash of realization. He let the whip complete its circular path, then dropped it on the floor beside Jenny. â€œJust a moment, Jenny, youâ€™ve given me an inspiration,â€ he murmured as he reached for the pencil and pad on the nightstand. Jenny eyed him desperately from the bed. â€œSorry, dear,â€ he said as he put the finishing touches on his design: the curved metal lashings that would pin the transparent elevators to the buildingâ€™s exterior. It was chancy, he knew. Hopefully his engineers wouldnâ€™t complain.

Jenny thrashed on the bed as Shawn finished up his plans. There was something so alluring to him about multitasking. Finally, he dropped the pencil and returned to the bed, removing her gag at long last. â€œOnly three lashings?â€ Jenny pouted as she reached for him. â€œIâ€™ll do better next time, darling,â€ Shawn laughed.

Afterwards, Shawn rinsed his hands with cool water from the blue faucet in the master bathroom. Jenny had picked it to match the old drawing of the water pump heâ€™d done back in the days when his pencil never left his hand. Heâ€™d been such an absolutist then, he thought sadly, only drawing what he could see with the same tools, never trying anything more. Jenny must have sensed what he was capable of, though, he thought as she wandered through to the shower, smiling. He admired his new artwork through the glass of the shower door while he dried his hands, then dressed and left for the bakery. 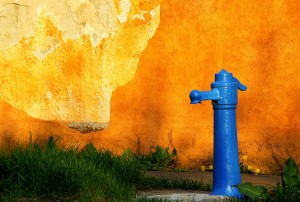