When I was a kid, we celebrated all the holidays. Our menorah went next to the Christmas tree, and our Easter dinner often included ham and matzoh. Go ahead, laugh. Just don’t judge me.

Let’s generalize and say that I was formally, publicly, Catholic. I attended Sacred Heart Elementary, where I learned to love Jesus, to recite Our Father and Hail Mary, and where I colored xeroxed copies of the stations of the cross. At home, my mom, my sister, my Bubbie all cursed in Yiddish and ate corned beef. I didn’t question it until much later. 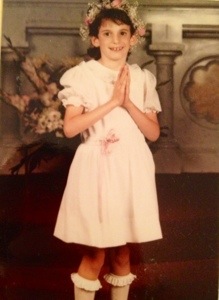 As a teenager, I abruptly decided to give up Catholicism, and celebrate only Jewish holidays. I felt that the main point of religion was to honor your ancestors, never mind spirituality. I still agree with this to a point, but I have long since realized that I wanted my Bubbie to love her more. I thought that if I were more Jewish, like her, that she would. Did she? Did it work? I don’t know. She was inscrutable.

On Christmas as a kid, my mom would take me to midnight mass. I remember one year seeing a young couple kissing in their pew. That beautiful image has stuck with me all this time, that joyful and spiritual togetherness. Sometimes the memory is sweet, sometimes it breaks my heart. I never talk about it.

My mom taught me that all religions are just different paths to the same God. I agree, but I still grew up feeling confused and slighted for not having one singular religious identity like my friends did. Why did my mom choose to walk two paths at once while raising me, between the Judaism that she grew up with and her chosen Catholicism? If she were still alive, I would ask her. In her absence, I have to guess that those childhood memories are powerful and it was her instinct to share them with me. But what I would like more than anything is to experience that shared faith, that certainty in that which cannot be seen. My mom found her spiritual source in church, but she chose not to force that source on me. I understand why, but I can’t help feeling that that intangible piece of religion, the faith, is lost to me.

I’ve long since made my decision on religion, and Geoff and I basically agree: We’re happy to belong to our synagogue, to send the kids to Sunday school, and to see them developing their singular religious identities. They deserve it. And even though their Grandma does occasionally take them to church, they know they are Jewish. I’m glad to offer that certainty to them. But as for the other piece of it–the faith that I’ve only ever felt in church–how can I ever share that with them?