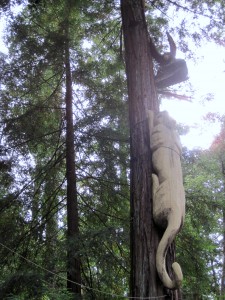 Without a word, she dropped to the ground. In Tomâ€™s memory, it always happened the same way. He and Stasia stood panting beneath her at the foot of the tree and suddenly she sprung to life. One moment a wooden gargoyle, the next a living, breathing panther. Tom always blamed the maze for what happened afterward. If only they could have just run straight away, he reasoned for years after the fact, if only they hadnâ€™t got caught up.

I miss her, Tom brooded as he hobbled down the creaky and twisting narrow staircase, recalling how he would chase Stasia down these very steps so long ago. Tom reached for his cane at the bottom of the flight and his imagination twisted the curved metal into Stasia’s open hand.

The knock at the door startled him. He leaned heavily on his cane and made his way to the door. By the time he made it, the knocking had stopped, but nevertheless he stuck his head outside, and tried to deepen his frail voice. â€œGet lost, you bloody scoundrels,â€ he boomed. Well, he tried to boom â€“ his voice fell disappointingly flat. He never could scare anyone properly.

Only a small wooden box awaited Tom on the porch. It had seen better days, from what little he could see. Like everything else around here, Tom thought darkly as he stooped to pick it up. Of course his legs chose that moment to give out on him and he dropped like a stone. The wooden floor of the porch was black with grime and his stomach rolled over in disgust. Still, he reasoned, he ought to uncover what brought him here. He pulled the box lid open and sixty years spilled out.

Tomâ€™s stomach lurched again as he picked up the tiny carving with shaky hands. The wood gargoyle, so large in his memory, looked laughably small in miniature. Whoever created it did a superb job, Tom thought, trying to keep the recreation from slipping out of his hands. Her eyes still wild after all these years, her body still taught and threatening, still poised to leap off the tree and chase down helpless children. The miniature fell to the ground, sending up a cloud of soot. Tom looked down and yelped when he saw the likeness of the beastâ€™s face staring out at him.

Tomâ€™s arms completed their metamorphosis and drooped to his sides, useless. He couldnâ€™t tear his eyes away from the small charcoal drawing of the panther, her eyes wild and her body angry as it had been all those years ago. Tom could see the pencil streaks where the jute pinned her to the tree. He saw his old fear captured in every pencil line and felt fresh surprise. Youâ€™d think after all these years, he pined away between pounding heartbeats. Tom was disappointed in himself.

He lifted one droopy, gooey arm and pushed the drawing away, both to stop seeing it and to see what was underneath. Underneath, the worst yet: a photograph. Tom felt the tears come fast when he saw Stasiaâ€™s face there. Everything was the same: her brown ringlets, her wide green eyes, her lips forming an O as she screamed, her fear. Even the tangle of hedgerow leaves. Nothing had changed.

Tom pushed the box and its contents away with his globby hands and wondered who would do this to him. The porch railings around him rose up into hedgerows and the grimy wood became soft grass beneath him, and old Tom was caught in the blasted maze once more. The wooden panther, suddenly huge, sprung to life and sank her fangs into Tomâ€™s soft neck, ripping his flesh away like she always should have.

Bobby wandered by the old ramshackle house in the evening after supper, and when he found the old man sacked out in a pile of odds and ends curiosity got the better of him. He stepped around Mr. Tom and picked up the little wooden carving. Neat panther, he thought without knowing any better. He put it in his pocket and smiled at the old lady in the doorway.

â€œHi, Bobby. Want to come in for tea?â€ she asked kindly. Bobby nodded. He always liked tea with Miss Stasia. â€œWhyâ€™s Mr. Tom sleeping on the porch?â€ Bobby asked as he followed her in.

â€œOh, he mustâ€™ve got bit by one of his old gargoyles,â€ she laughed.

15 thoughts on “Attack of retrospect”