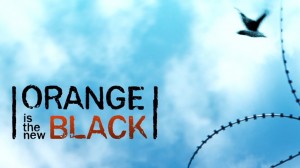 I’ve heard really good things about this new show, Orange is the New Black, and last night I finally got around to watching the first episode. Yeah, I liked it. I can see why I’ve heard so much about it. I’m drawn to the idea of prison as this sort of alternate reality where smartphones are obsolete and escapism is nearly impossible. I like that women get to be bad asses, drawing on their survival skills. I like the reverse-edginess, where the prison culture feels like it could break down into a knitting circle at any moment.

I did have one gripe, though. It bugged me how Chapman’s past and present are pointedly at odds with each other. Her decade-old lesbian relationship bought her a ticket to prison, forcing Chapman to put off her marriage to her nice-Jewish-boy fiance. Now, I’ve only watched one episode, so maybe the writers will redeem themselves. But really? The glaring stereotypes strike me as outdated.

Have you watched it? What did you think?