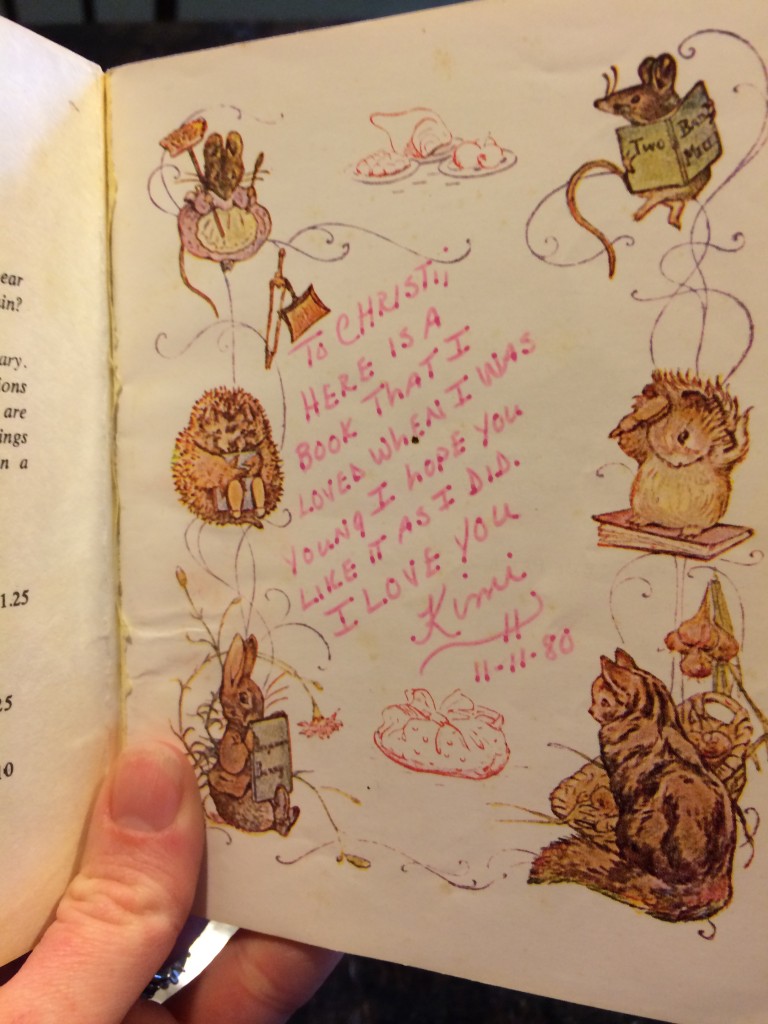 My well-loved copy of The Tale of Peter Rabbit by Beatrix Potter.

The past few months Iâ€™ve been reading the kids Lemony Snicketâ€™s Series of Unfortunate Events. We just began book five, The Austere Academy. The kids are obsessed with it, and Geoff and I like it a lot, too. Itâ€™s dark and funny, with lots of big words. In other words, itâ€™s awesome.

The stories are about three orphans, siblings whose parents died in a fire, who go on to have adventure after adventure. In each book the kids narrowly avoid a different disaster, and they regularly find themselves in situations that they never would have if their parents had survived.

When I was a kid I used to wish that my mom would die just so that I could have the kind of adventures that the Baudelaire orphans do. No, I didnâ€™t actually want my mom to be dead, I just wanted my life to be more fun. If she died, I thought that I could go and live with my godmother, who seemed infinitely more interesting than my mom. I also wanted to live in an RV and travel around the country, something that was out of the question for my mom. Needless to say, my mom lived into my adulthood and I was at least seventeen before I ever had a real adventure.

My mom nearly gave me up for adoption â€“ did I ever mention that? Itâ€™s a long story of its own, but when it came down to it, she changed her mind. She was single, poor, divorced, and unwed. She had little going for her in general, so when she found herself pregnant with me at 38, she first thought that adoption would be the best option. Then I was born two months early and my mom nearly died from complications. When things settled down, she decided that the universe had a message for her. She decided to take another stab at motherhood.

Iâ€™m glad that my mom did not give me up for adoption. I mean, I hope that goes without saying. Iâ€™m lucky in so many ways to have been raised by my mom. She gave me all that she had to give, and now I often wonder how she did it. Yet looking back, my life feels like a series of narrowly missed adventures. My childhood was safe and quiet, I went to college just 20 minutes from home, I got married at 23.

Iâ€™ve never been thrown to the wolves. Iâ€™ve never risked it all on my own in the world. Iâ€™ve never entrusted myself to the universe just for fun. Damn it, I want to.

Did you know that Georgia Oâ€™Keefe chose her home in Abiquiu, New Mexico, because she liked a door in its courtyard? She saw the door, and she knew she needed to paint it despite the house being in ruins. It took her years to buy the home and renovate it, but she finally did. And she painted her door many times, in all sorts of different ways. 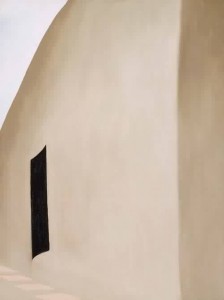 I just finished reading Blink by Malcolm Gladwell. Have you read it? I liked it. He talks about the phenomenon of snap decisions, how they work, and their strengths and weaknesses. He briefly explains that our minds have a â€œlocked doorâ€ between the conscious and unconscious. All the mechanics of our snap decisions lie behind the locked door of our minds, which he says, we canâ€™t ever really know.

Not being able to know my own mind feels infuriating. Gladwell writes about a tennis coach, blessed with the ability to predict whenever a player will double fault a serve, who lies awake at night trying to figure out why he knows what he knows. Isnâ€™t that just so true? I want to know how my mind works. I want to open my locked door, donâ€™t you? 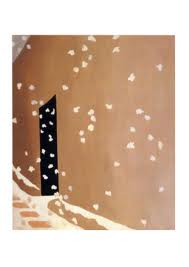 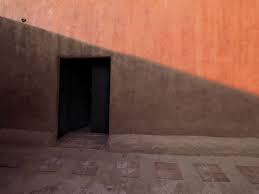 Iâ€™m thinking of Georgia Oâ€™Keefe painting her courtyard door over and over again. Was she trying to create the perfect door? No. She was giving her unconscious a place to express itself. She was seeing what her door could produce. Itâ€™s true that we canâ€™t ever know the mechanics lying behind our locked doors. Even the most intensive psychotherapy only offers the opportunity to watch ourselves and see what we do. What actions arise from our unconscious? Is there a pattern to the output? In the absence of facts â€“ of knowledge â€“ understanding comes from watching the door and seeing what we can create from it. 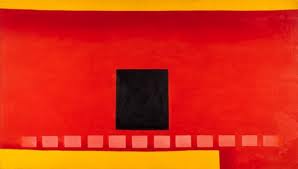 Whatâ€™s your favorite book? Iâ€™m talking fiction here, of course. Or sci fi, fantasy, mystery â€“ whatever you like.

Iâ€™m curious, can you describe your experience of reading it?

For me, the best stories draw me in, steal me away from reality, drench me in otherness. Iâ€™m seduced by the characters, implicated by the plot. If the writing is good enough, I can literally feel the story.

Every single time I pick up Murakamiâ€™s The Wind-up Bird Chronicle, I am instantly transported back to that well, dark but for noontime and full of thought. Iâ€™m walking the streets of Sapporo and spending listless days sitting on a park bench.

Lately Iâ€™ve been reading the Game of Thrones series, in which George Martin spends copious amounts of time describing glorious settings, gorgeous clothing, and delicious meals. His plots are secondary, yet his words transport me to another time and place. I can honestly say that I have inhabited the world of Westeros, even if only for the span of his novels.

I think certain books appeal to certain people, appealing to their pasts, invading their psyches in some highly personal way. We may not even realize the effect the story has on us until it is too late, until the twists and turns are permanently lodged somewhere in our memory banks. Those stories change us. They fascinate us, filling a blank, offering a clue to some mystery. They fuel us. They give us a chance to step outside our everyday reality into something new, something unexplored and unknown. They let us meet people, know individuals whom in our real lives would remain strangers.

Have you experienced this? Do you agree that fiction can be transformative, even transcendent? Have you felt that allure of becoming an audience member, of possibly learning something new about yourself? Has a story ever reintroduced you to your imagination? Tell me, what book did that for you? 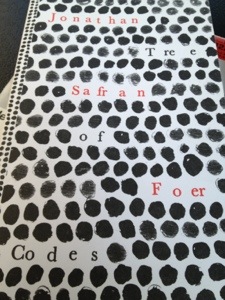 It was a birthday gift from a friend who reads this blog. Thanks, S. I liked the book very much. I also like that you get my project here. You understand me. 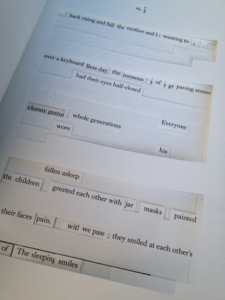 The book is a work of art, its narrative cut, literally, from the pages of another story, The Street of Crocodiles by Bruno Schulz.

Tree of Codes works, loosely. It is an exercise in taking away, a practice of editing. The result is a translucent tale, bordering on illegibility, that includes as it excludes.

Here are a few good lines:

– “children greeted each other with masks on their faces”
– “we passed the chemist’s large jar of pain.
-“a face from which life was walking, a pale network of lines on an old map of distant lands wandering over memories which would suddenly blow away.”
-“he became almost insane with mother.”

The story is somewhat strange and dreamlike. Reading is difficult but quick. It leaves me wondering about the rest of the story, the scraps of edits tossed on the ground in the process, not to mention the whole wide world excluded from the original text of The Street of Crocodiles.

So, have you read it? What did you think of it? If not, you should check it out.

I’m excited, you guys. Last week, my godmother sent me these: 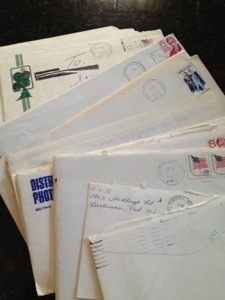 They are a collection of letters that she received, separately, from my mom and my dad. They were written in the late 70s and early 80s, when I was a baby.

I read this one on Friday: 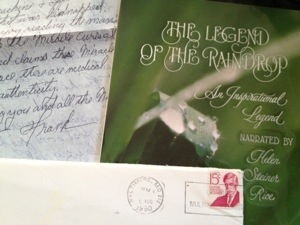 My dad wrote it in 1980. His writing reveals him to be thoughtful and quite spiritual. Also long winded. He wrote about me a lot, which surprised me.

I also started reading this: 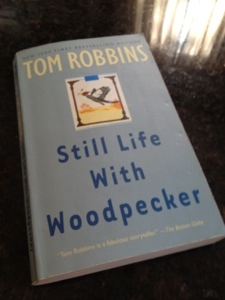 It’s weird. I’m not into it yet. But I did check the copyright page. It was published in 1980, the same year as my dad’s letter. That’s funny, right? 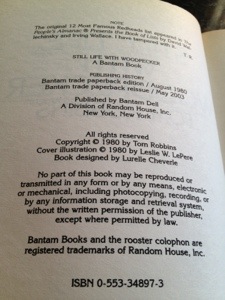 I guess I’m going to spend a few days in the 80s. Maybe I’ll put on some legwarmers and crank this, too.

Want to join me?